The holy grail is to spend less time making the picture than it takes people to look at it. - Banksy
view all PHFA paintings

Home is where the art is - Sheffield Telegraph

Home is where the art is

EMERGING as one of the North's most prolific and popular artists, Peter Hill has opened a flagship gallery in his home city. He already has two successful galleries exhibiting exclusively his own work, Calver Mill Gallery in the Peak District and The Kentmere Gallery at Ambleside, and has now converted the former Archipelago Art Gallery in Ecclesall Road into his main showcase. Working in oil on canvas, the artist draws heavily on the landscapes of Derbyshire and Cumbria and on his extensive international travels.

The art school drop-out from Dore who has gone on to become one of the most successful artists of his kind in the UK today opens his £500,000 new gallery which includes a courtyard, water feature and outhouses which will eventually become gallery annexes. Hill actually reversed the trend of art school dropouts "by leaving to get married, get a mortgage and do normal things", forging a successful career in financial services.

The route back to fulfilling his artistic ambitions came almost by accident. "I was making a business presentation and forgot I was meant to provide a raffle prize. You had to tell people something they didn't know about you and I revealed my artistic side and said I would paint the winner of the raffle.

I hadn't painted for 15 years and enjoyed it so much I made the decision to go back to it and open a gallery "I left Psalter Lane because what they do is all abstract," he asserts. "It's a big bugbear of mine that there's a gap in art education. You can either do illustration which is too tightly defined or fine art where they don't like representational art. There's nothing in between and I think that's what most people do." Nevertheless, Hill believes his background in finance has been a definite asset in equipping him with commercial acumen he might not have otherwise.

Three galleries entirely devoted to his paintings demands a high output for the artist. "I am a fast worker," he says. "I tend to paint early in the morning, often getting into his studio at Calver by 5 am with a completed picture by lunch-time. But you have to be in the mood, it's not a question of churning them out."

In the gallery, there are landscapes bold cityscapes, sensuous figures, abstracts and a number of paintings inspired by a visit to China in July. He tends to go somewhere exotic a couple of times a year, bringing back artefacts to sell in the gallery as well as garnering material for his own painting. Whatever he produces seems to find a following. "They may be different but people can see it's a Peter Hill," he says. "The characteristic in my work is the use of paint. I am a quick worker and they have a fluidity to them and also a distinctive colour content. I use colours in the landscape that should not be there.

I work from memory all the time. I think if you work from photographs you get caught up in the detail. I think it's gut instinct and risk-taking that produce the best work." His paintings have already attracted the attention of another of the city's most successful sons, rock star Rick Savage of Def Leppard who enjoyed a preview of the new gallery and agreed to perform the official opening at a VIP party last night. 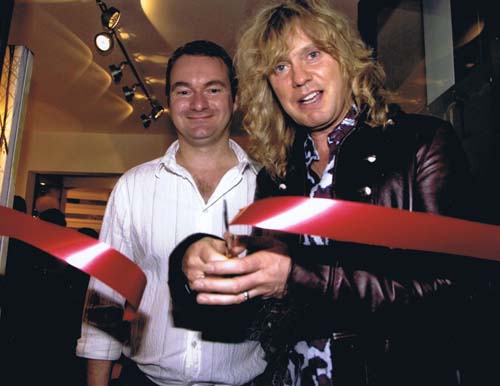 From this page you can view them all in one place and delete any from your list if you wish. When you are happy with your list you can then give us a call to discus them or use our unique list enquiry form.

Our list enquiry form is at the bottom of "your selections" page and allows you to fill your details in and click send. At this point the form will also include details of all the paintings on your list so we can reply with further details about them all for you.

For further information about the original paintings by Peter Hill, to initiate the process towards a bespoke commission, to arrange a Home Design Assessment appointment or just to get in touch please use any of the following: